Rafael Vargas Bernard asked recently on Facebook what it would take to get someone to write about his exhibition Sobre-Analisis-Sobre presented at El cuadrado gris. While offered in jest, his entreaty opens up a number of interesting questions. As artists and art writers, we understand the quest for attention and the struggle to find an audience 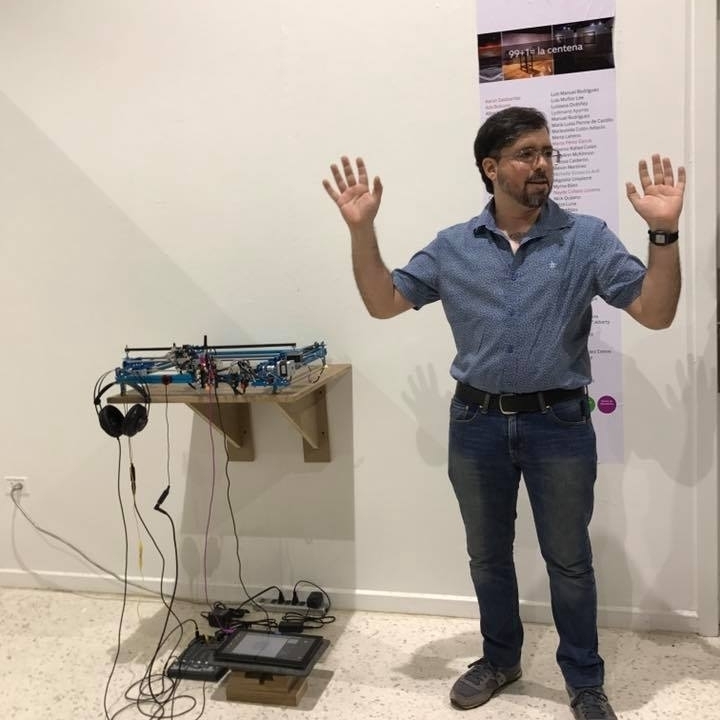 Artist Rafael Vargas Bernard asks, “who do I have to bribe?”

Relocating from upstate New York, we came here with an abiding interest in the art of the island and the artists making that work. Our initial experience suggested that it was difficult to find a centralized resource for art information. The local newspapers and magazines provided occasional articles, but often those articles were a replay of an exhibition's press release, full of information, but lacking insight. The past seven years have shown improvement. Now art writers often give careful attention – as they explore the methods and intentions of the artists under discussion. Now there are more articles on a regular basis, and writers are given more space for their opinions.

Meanwhile, a couple of small but important local art magazines have ceased to publish, with nothing to take their place. This may be a function of the changing way that such information is distributed. As it becomes increasingly difficult to support printed publications, they are replaced by online resources. We still prefer to read articles in print. The information seems to have more substance and the pictures are more impressive on the printed page. But, our opinion does not have much influence. The world of publishing is rapidly changing and we need to adapt or we will be left behind, stranded with a pile of yellowing newsprint and curling glossy magazine pages.

We have discovered that online publishing is crucial. Online provides a forum in which the writer has more control, immediate access to an audience, and the means to get direct feedback from the readers. We do not see this as a replacement for print publishing, but rather an enhancement, which seems to be the attitude of most traditional publishers. There are few newspapers or magazines that do not also have an online presence, and many of those sponsor blogs in addition to their websites.

For the independent writer, online publishing provides intellectual freedom, the opportunity to express an opinion, and a means for getting your word “out there.” Attracting and keeping readers can be difficult, but there are tools to help ease the way. Facebook, Instagram, Twitter and SnapChat can be useful in this process. You can connect a blog to those resources, and every time an article is posted, notices are automatically cross-posted to those other forums. Then, it becomes a project of building an audience through online networking while continuing to add new content.

It should be obvious that we are not limiting our remarks to writing about art. Instead we suggest that this provides a blue-print for doing creative work and seeking an audience. Our previous article, ART IN THE AGE OF THE INTERNET was a cautionary tale for artists using the internet to promote their work. Efforts must be taken to ensure that your intellectual property is protected. You don't want to give away your production, nor would you like to see someone else make use of your work and take credit for it.

So, what about Vargas Bernard and his quest for attention to his exhibition? Searching for him on Google returns 2000 articles, images, and videos related to his art. On Facebook he has over 2000 connections. El cuadrado gris has over 2000 followers. There is probably a large overlap, but the audience in both cases is substantial. Scrolling through the Facebook pages of the gallery and the artist, one finds many comments, questions and emoticons. To what exactly do they refer? For his exhibition, Vargas Bernard installed four works in the basement space of the gallery as shown in this diagram … 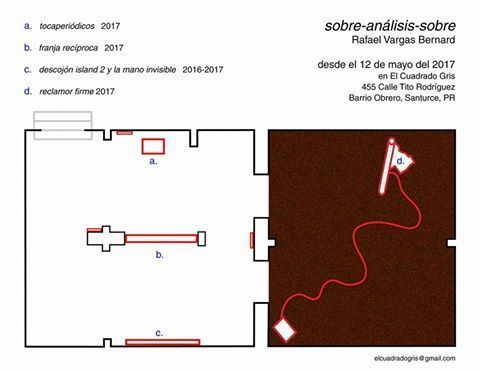 Each work consists of common objects connected to home-made electronics. A) tocaperiodicos, consists of a record player turntable whose stylus has been replaced by an optical sensor which reads the patterns on the front page of local daily newspapers, which are used instead of vinyl records. What the viewer hears through headphones is sounds produced by the spinning newspaper. 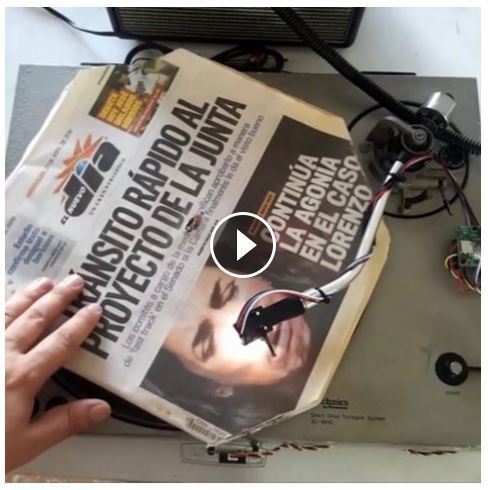 B) franja reciproca is an elaborate piece of flat plastic electronic ribbon cable to which sensors and other electronic have been hand-wired. This work requires two viewer participants, each of whom inserts a thumb into a small harness. While attached, as they move around, they can hear modifications to the sound of their heart rhythms. 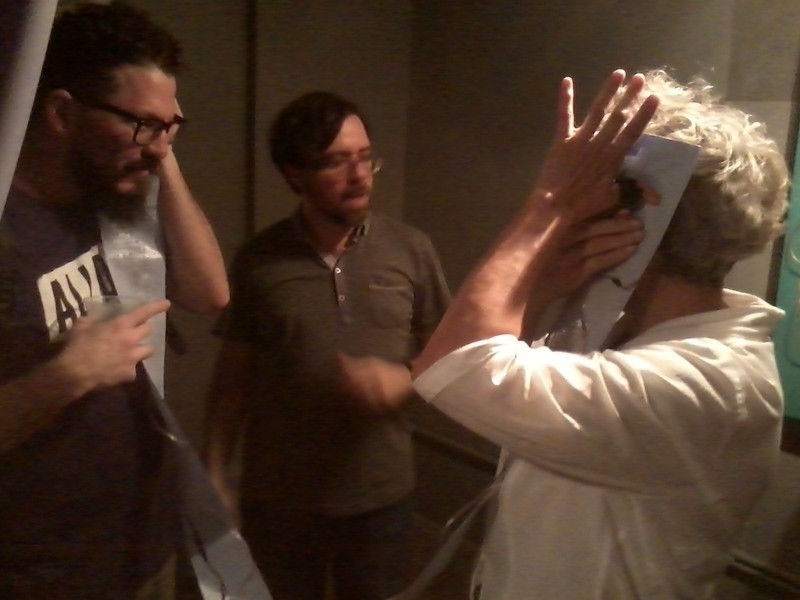 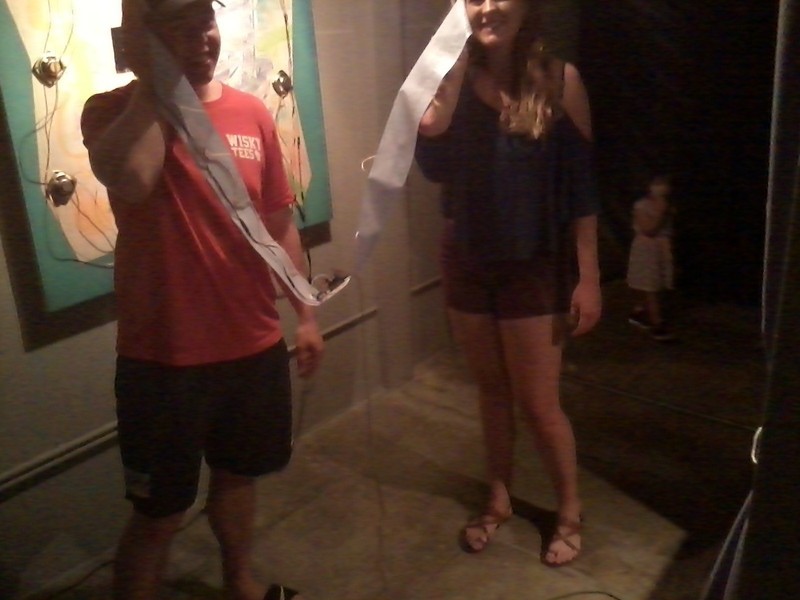 C) discojon island is a map of Puerto Rico with various electronics and speakers attached, which emit sounds when approached by the viewer. 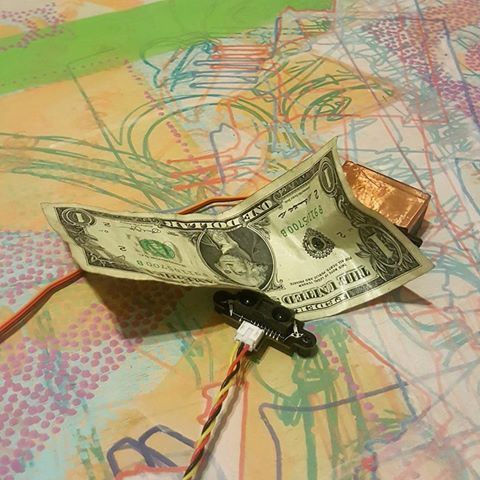 D) Reclamor firme, the most elaborate work, includes a side room with the floor covered in dirt, underneath which has been installed sensors and electronics. The viewer is encouraged to pick up a flag. The bottom of the flag pole also has a sensor. The viewer is instructed to plant the flag in the ground. As the pole strikes the dirt, a loud drum sound is produced while a segment of La Borinqueña fills the room. The more one bangs the floor, the louder the sound and the longer the segment that is heard. 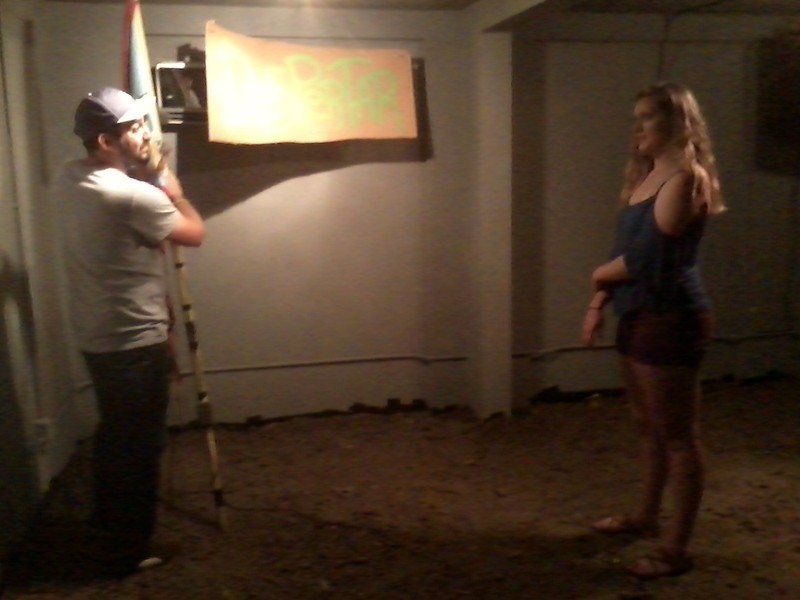 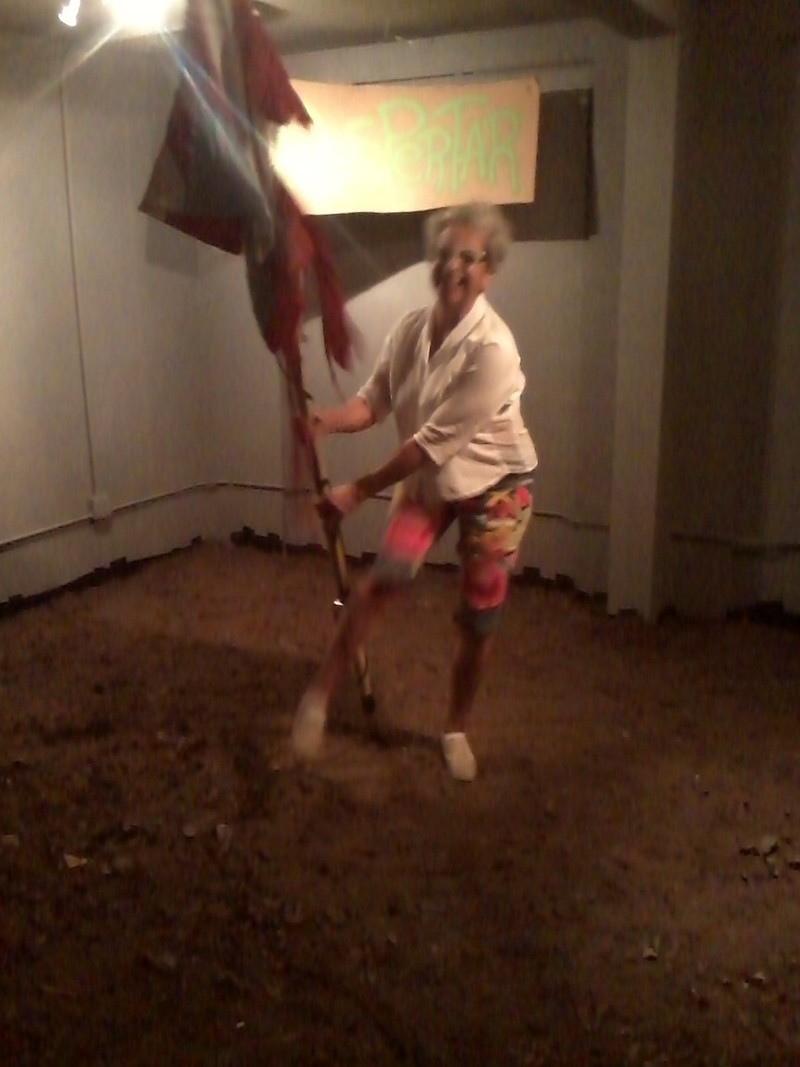 Regarding the meaning, when possible we prefer let artists speak for themselves. Vargas Bernard says, “When the public comes into the exhibition, I want them to open the door and activate the work, and to feel an ownership of this work. Because I created it, therefore I release it so that they might do what they want, while creating their own version in the process.”

He says he considers these works to be “strange experiments” which “measure vital signs” and which can “create sensations and emotions between two persons.” His discojon island, while appearing to be a traditional painting, in fact “reacts to the audience, and changes depending on their proximity.”

As for us, we will take his word for it.