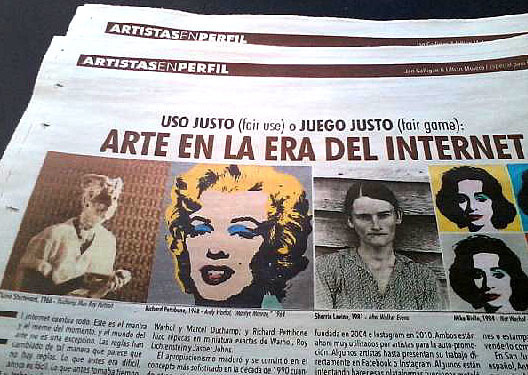 The internet changes everything. This is the mantra and the meme of the moment, and the art world finds itself under the spell. The rules have changed in ways that make it seem like there are no rules. What once was difficult, now is easy. What once took time and effort now can be done in a few keystrokes. Where previously art resided in semi-protected environments: art studios, galleries, museums – now artists, galleries and museums present themselves in the all-sharing, everything up for grabs domain of the world wide web. On one hand this provides for enormous exposure, while on the other, it opens an artist's oeuvre to appropriation, adaptation and reuse, often without the artist's knowledge or permission.

Appropriation has been a part of the practice of art since the early 20th century, originating with Dada and Surrealism. The intention of these artists was to provoke a sense of heightened verisimilitude, while making comment on the contemporary milieu. In the 1950s Robert Rauschenberg created the first contemporary art work employing the work of another artist, when he convinced Willem de Kooning to provide one of his pencil drawings which Rauschenberg then laboriously erased, creating his Erased de Kooning Drawing.

Appropriation art matured and the concept became more sophisticated in the 1990s as other artists took up the practice including Deborah Kass, who made Warhol-like paintings using her own image; Damien Hirst, who used the Disney Mickey Mouse to his own ends when he wasn't making paintings using Spin-Art machines; and the artist who now epitomizes appropriation art, Richard Prince. 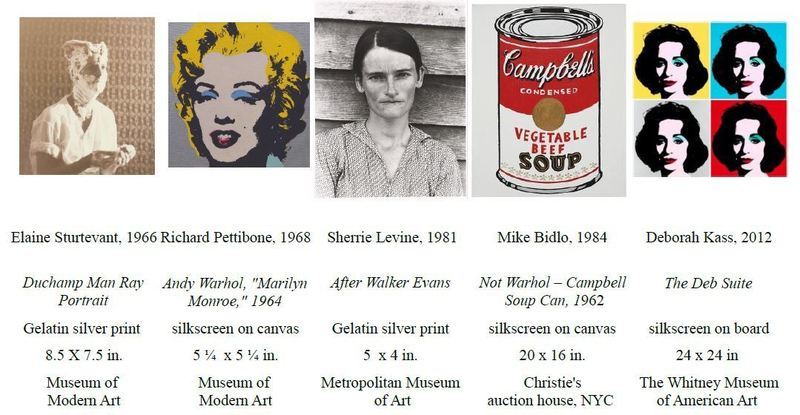 Unlike other artists of his generation, Prince embraced the internet – as a means to present and promote his work and as the source of material for his art. Recently this has led to a series of law suits against Prince, as well as against artist Jeff Koons, by the authors of the originals. The success or failure of those law suits has hinged on the concept of fair use – whether or not the new art work sufficiently transforms, or definitively comments on the original source. Prince was sued by a photographer whose images of rastafarians Prince used in his paintings, the result was a split decision: 23 of the paintings were deemed fair use, five were not. Koons was sued successfully by a photographer whose photo was the model for a Koons sculpture of a couple holding eight puppies; and most recently by the photographer of the 1986 Gordons gin advertisements Koons rephotographed for his own Luxury and Degradation series of 1986; that case is still in the courts.

Facebook was founded in 2004 and Instagram in 2010. Both are now heavily utilized by artists for self-promotion. Some artists now directly present their work on Facebook or Instagram, and a few are trying to make those platforms work metaphorically as their canvas or paintbrush. The problem is, that while they are public entities providing world-wide access, according to a copyright attorney in New York – by posting pictures and videos, you grant Facebook “a non-exclusive, transferable, sub-licensable, royalty-free, worldwide license to use any content that you post on or in connection with Facebook.” Instagram's terms of service states: “To help us deliver interesting paid or sponsored content or promotions, you agree that a business or other entity may pay us to display your username, likeness, photos (along with any associated metadata), and/or actions you take, in connection with paid or sponsored content or promotions, without any compensation to you.”

So, where does that leave the artist in today's internet free-for-all? One would be advised to proceed with caution when uploading personal artworks of any sort to the internet. You cannot stamp them with a copyright notice and expect that it will be honored or remain in force. On public forums your work is fair game; unless you take the trouble to publish your work in a more controlled private format, say on your own website, or a website where their terms let you retain copyright to your original material. Fair game means anyone, anywhere can collect your work and do with it as they wish: use it outright, incorporate it into their own creations or stamp it with their name and present and sell it as their own.

Closer to home, in 2005 Spanish conceptual artist Antoni Muntadas was commissioned to create a public art project for the Roosevelt station of the inter-urban train. He used photographs from two books by photographer Jack Delano: De San Juan a Ponce en el Tren and Puerto Rico Mio. Muntadas work is titled On Translation: El Tren Urbano, and reproduces Delano's photographs exactly, enlarging them to enormous, 20 x 30 foot, backlit transparencies. In documents regarding this work, Muntadas acknowledges Delano. Although he does not specify that his work is an homage, clearly it is an artistic appropriation.

Contrast this with the work of local artist Carlos Mercado who has appropriated many of Jack Delano's photographs, turning them into a series he calls Iconos, in which he gives no mention of Delano, in the titles or accompanying descriptions. 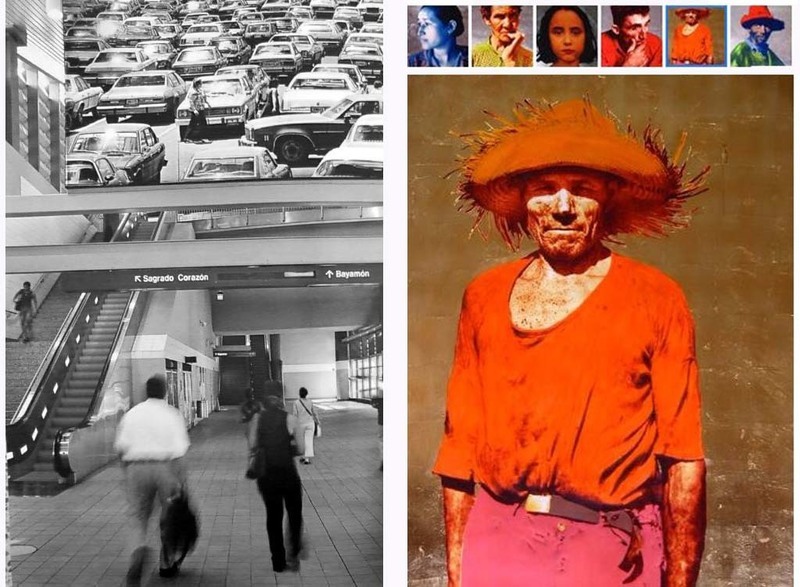 Mercado's addition of color to Delano's photographs undermines their iconic power, turning them into a decorative pastiche that renders them as oversized picture postcards. Further negating their original meaning, Mercado has given each of the photographs his own title. For instance, a 1940s Delano picture of a group of workers, packed onto a farm truck, is titled COMO SALCHICHA EN LATA. Mercado is able to use Delano's photographs for this purpose without concerns of copyright because they are freely available for download at the Library of Congress. An interesting exercise at best, Mercado's pictures, unlike the carefully considered work of Muntadas, do not pay tribute to – or in any way honor – the original art of Jack Delano.

FAIR USE
(in US copyright law) the doctrine that brief excerpts of copyright material may, under certain circumstances, be quoted verbatim for purposes such as criticism, news reporting, teaching, and research, without the need for permission from or payment to the copyright holder.

FAIR GAME
(hunting, archaic) quarry that may legitimately be pursued according to the rules of a particular sport