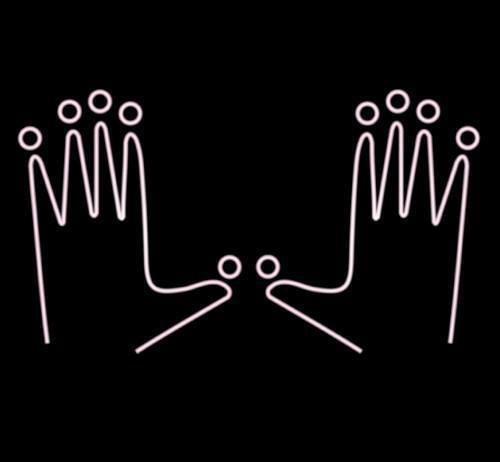 We first encountered Chaveli Sifre and her art at Roberto Paradise when the gallery was located in a beautiful old wooden house on calle Hipodromo. We wrote about her exhibition, Fixed on the Scent of Light, in a June 12, 2013 article titled Chaveli Sifre: Scents and Sensibility. Since then, Sifre has moved to Berlin where she continues her art practice and sings with her pop band House of Life, while Roberto Paradise has relocated on calle Roberto H. Todd. We remained in contact with Sifre by way of Facebook, and were delighted when she posted an announcement for a one night project to be presented at La Estacion Espacial in the Miramar arts district which includes galeria Agustina Ferreyra and the recently announced El Museo de Arte y Diseno de Miramar, scheduled to open in 2018.

La Estacion Espacial, directed by Guillermoe Rodríguez and housed in a former bodega is a temporary platform for contemporary art created with the support of Beta-Local's La Practica project. La Estacion Espacial presents a continuing series of micro-exhibitions and seeks to open a local / international dialogue in the art community.

Sifre's description of her project Personal Attention said she would convert the exhibition space into a healing center employing different faiths, various rituals, and therapeutic methods – in particular the Japanese alternative medicine technique Reiki, which was developed in the 1920s by a Buddhist and has since become a world-wide phenomenon. The name is derived from the Japanese words rei – miraculous spirit, and ki – breath of life. Reiki masters claim that they are able to perceive a subject's ki-energy and determine if the life force is functioning at a high or low level. If the energy s low, a Reiki master can, by passing hands over the affected areas, transfer energy and improve the subject's health and happiness. This appealed to me because for many years I have suffered from tinnitus, a condition of the inner ear which fills my head with various ringing, roaring, buzzing, clicking and hissing sounds. Apparently listening to rock and roll music at very high volume when I was in my twenties caused this. Now that I am nearly a septuagenarian, I am haunted by the echoes of my youth. There are no cures for tinnitus, no medications and no operations which can silence the background noise. I've tried various homeopathic treatments, but they had no effect. 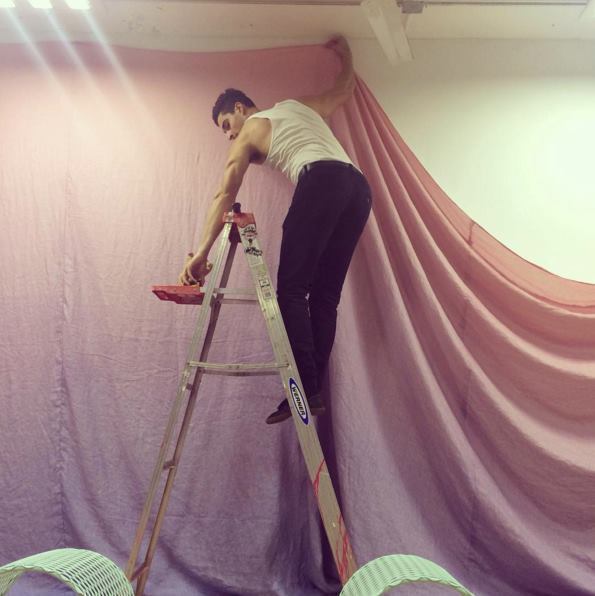 Preparing the background for Sifre's installation

When I told Lillian about Sifre's project and insisted that we attend the performance, she treated me to a series of Ricky jokes about Ricky Rosello, Ricky Riccardo, Rikki Tiki Tavi - Rudyard Kipling's mongoose, and that joke about Ricky Martin changing a light bulb. Arriving at La Estacion Espacial, we found many people outside the storefront. Inside it was calm and serene. The wall opposite the entrance was covered in a large diaphanous fabric that rippled gently with two fans providing a cooling breeze. I learned from Sifre that the fabric was professionally dyed using two colors certified by Pantone corporation, the international arbiter of color popularity. Each year Pantone names a color of the year. For 2016 they picked two colors: number 13-1520, Rose Quartz and number 15-3919 Serenity. Pantone attempts to lead the marketplace with their color choices. They say, “As consumers seek mindfulness and well-being as antidotes to modern day stress, we join together Rose Quartz and Serenity (a warm embracing rose tone and a cooler tranquil blue) to effect a soothing sense of order and peace.” Sifre has literally joined those two colors in a subtle blend from rose to blue creating a gentle mauve where they mix together.

In the center of the exhibition space Sifre installed a sinusodial sculpture made from metal mesh painted an aqua color. The center peak serves as a bench where a person sits when having a Reiki session. Two Reiki masters dressed in matching white tunics imprinted with various religious symbols simultaneously apply their no-touch massage therapy, while the subject, facing away from the audience, can contemplate the slowly wafting fabric or dream their own thoughts as the treatment progresses. I watched two patients being treated while I waited for my own session to begin.

Meanwhile, Sifre explained a video she had installed on a small monitor in one corner of the room which can be watched while sitting on a soft white cushion imprinted with the same symbols as the Reiki robes. This video is designed to induce ASMR in the viewer. ASMR was named in 2010 by a New York cybersecurity professional. When watching and listening to security monitors for long periods, she would feel a subtle sensation of tingling and euphoria, starting on the scalp and moving down the neck resulting in a kind of spine-tingling brain orgasm. She named this sensation Autonomous Sensory Meridian Response and started a Facebook Group to share her experience. Sight or sound can cause the sensation. Repetitive sounds can trigger a response. This might explain the feeling that I often have of fingers caressing the top of my head and the back of my neck. It could be that the repeated ringing and clicking noise of the tinnitus in my ears is causing an ASMR response on my skin. I was asking Sifre about this when her assistant told me it was time for my Reiki session.

Watching others receive Reiki made me realize that not only are they the subjects of the treatment, but they are the material of Siefre's art. The Reiki masters, acting on Sifre's behalf, sculpt and mold the energy field of the person under their treatment, adding or subtracting ki and altering the subjects overall mood and well-being. As I sat down on the sculpture bench to begin my session, I realized that I know what it is like to be the subject of an art work – a portrait or a self-portrait, and the object of an art work – the viewer or the recipient, but never before have I been the actual material from which the art is being made. Not only that, but this art work, of which I am the material, if successful, will remain with me after I leave the exhibition and if it has any long-term effects might continue to exist in the days ahead. 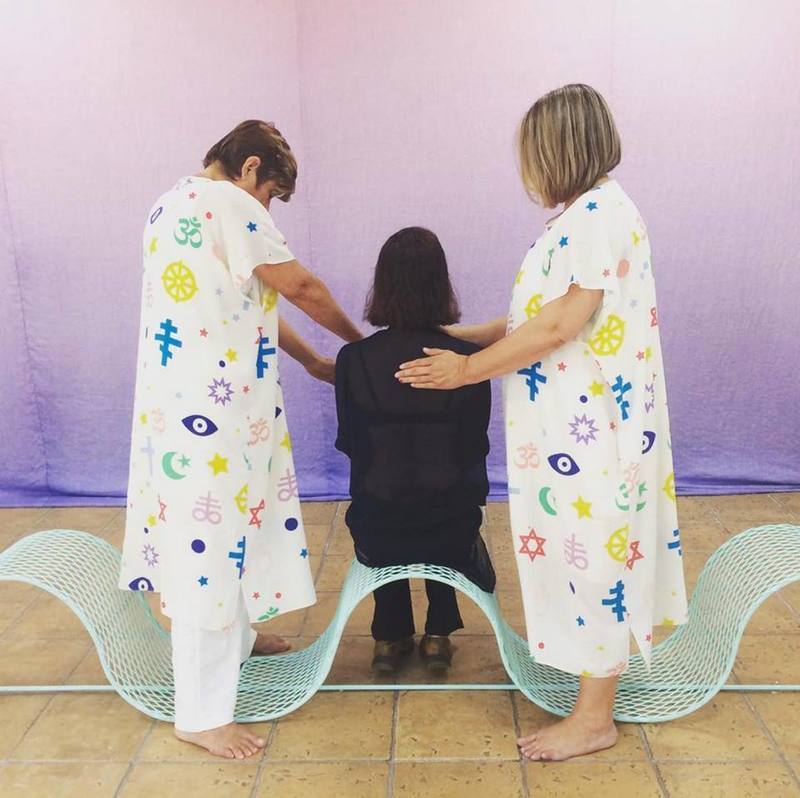 
I decided to keep my eyes open and stare straight ahead at the soothing color of the curtain in front of me. Because I have an age-related eye condition, I am not able to see well on the periphery, so I did not see the two Reiki practitioners as they begin working their way around my body. I did feel my hair begin to stand up – on my head and the back of my neck, and I swear I could see waves of energy flowing in the space between me and the curtain. The curtain moves in the breeze, but I saw separate, distinct waves rising from the area near my waist then floating away, above my head. A sense of peace began to overtake me when the Reiki master touched me on the shoulder to say that my session had ended. I stood up slowly and thanked them both for the personal attention.

Back outside, I found Lillian in conversation with a small group of artists. “They were just telling me about TMS,” she said. “Transcranial Magnetic Stimulation. It's a new scientific technique that uses electrical pulses to stimulate the brain. A writer for the New Yorker described how TMS made him feel like a savant when he tried it. He was smarter and excelled at mental tests and mathematics. And another writer, with no skills in drawing, made remarkable pictures while under TMS stimulation.Let's try it,” she exclaimed.

I wonder what effect it would have on my hearing or my vision.