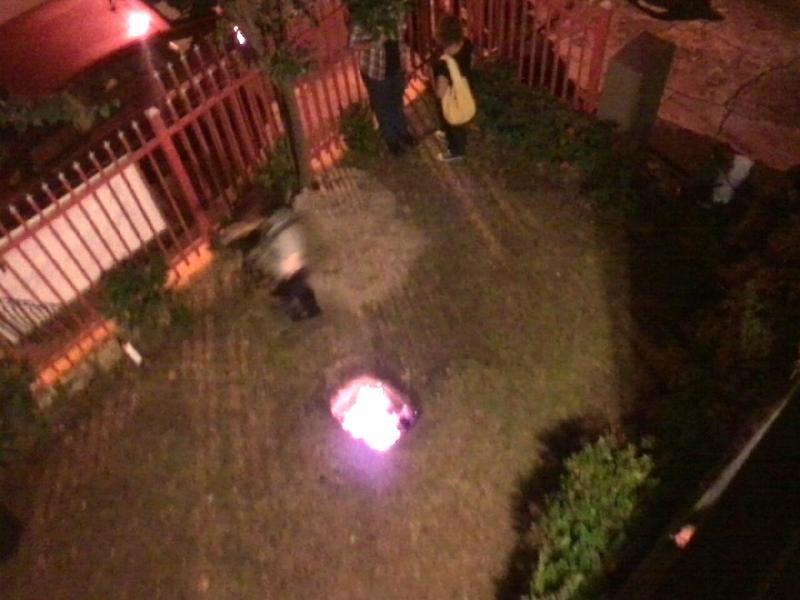 photo caption: a large square hole was excavated in the outdoor patio of the gallery. At the bottom of the five foot deep pit, she had made a fire which burned steadily during the night creating both a spectacle and adding a sense of danger to the proceedings

I'm shouting, “Lillian! Stop!!” Lillian is on the opposite side of the main exhibition room bending close to inspect a set of glass vials filled with multi-colored liquids. I've just read the book. Those liquids are deadly. “Permiso! Perdon!” I push my way through the crowd, momentarily having a catastrophic vision of this room full of people slumped on the floor, artists and art patrons alike. A horrible newspaper article starts assembling itself in my mind, reporting on this tragedy. Lillian gives me a puzzled but menacing look. “I caught you just in time,” I tell her. “What?” she says. “I was just reading the artist's book about this work, and everything is not exactly what it seems,” I tell her.

Eight beautiful glass containers are displayed on the top of a waist-high pedestal that has been covered on each of its four sides and top by mirrors. Each container is filled with a brightly colored transparent liquid: chartreuse, turquoise, peach, raspberry, mint, champagne, and sandalwood. They tempt the viewer to make a closer inspection. At first they seem lovely and alluring. Viewed carefully they appear to be the work of a somewhat mad scientist. These containers are in fact flasks and beakers similar to those used in a scientific laboratory. Each has been sealed against tampering or accident. According to the book, there is a different but deadly volatile component mixed inside each of them including: belladona, the drugs benzodiazepine and scopalomine, chloroform, and verbena.

Chaveli Sifre was born 1987 in Wurzburg Germany. She was raised here in Puerto Rico and educated at the Escuela de Artes Plásticas in San Juan. Although young, she has already shown her art  in a number of exhibitions on the island as well as in Berlin, Miami, NYC and other cities abroad. Fixed on the Scent of Light is her second show at the Roberto Paradise gallery and presents work created during the past year while she has been living and working in Berlin. She is a multi-faceted artist and her work includes sculpture, drawing, painting, tapestry, texts, poetry, video and sounds, all employed and presented in a conceptual, contemporary manner. An example in this exhibition is a large wall-mounted sculpture created using neon tubing. White tubes form a large circle that encases the work. Blue tubes describe two faces whose profiles are interlocked. Red tubes depict a pair of lungs. This work is entitled Perpetual Renewal, and it glows softly, illuminating one end of the gallery.

Accompanying these works, Sefri has assembled a large grouping of paintings on paper, all the same size and shape. Each looks as if it could be a page torn from a paperback book. The subjects of these paintings are flowers, butterflies or beetles, slightly abstracted, flattened and presented against  multicolored, textured backgrounds. Careful inspection reveals a skull on every page. Danger or death lurks inside every beautiful image. The viewer is advised to approach with caution.

In a recent online interview in ArtSlant magazine, Nicole Rodriguez spoke to Sifre about the use of deadly ingredients in her perfume concoctions and asked if she might not have just used water, since the sculptures are in sealed glass bottles. Sifre responded that she needs to go “one-hundred percent” to realize an idea. She said she found some chloroform and mixed it with sandalwood and rosewater because she “wanted to go classic.” She had placed her sculpture on a very low pedestal. “I thought eventually people might knock it over accidentally and then collapse. I hoped for it -- but it didn’t happen.” This exhibition is no exception. Here one sculpture sits dangerously on the floor, in the middle of the gallery. A small coconut has been filled with a dangerous mixture and the hole plugged with a cut glass stopper, the kind used to close a large bottle of expensive perfume. Like “a time bomb” this sculpture sits waiting for someone to kick it across the room, spilling its contents and creating a disaster.

Lillian is curious, I am cautious. Where she's spontaneous, I tend to be deliberate. She's compulsive, I'm obsessive. We tend to balance each other out. She has the insight and I try to compile the background research. For me, Chaveli Sifre's work can be compared with conceptual classics as Marcel Duchamp's 1919 sealed glass ampule of Paris air or Italian artist Piero Manzoni's 1961 small tin can called Merda d'artista. Sifre's neon sculpture brings to mind Bruce Nauman's 1980s series of neon cartoons, although, where Nauman's sculptures are animated, Sifre's casts an unmoving steady glow. Lillian contradicts me on these referents, pointing out that Sifre's work is both feminine and feminist in construction and intent. Lillian suggests better antecedents would include: Eve Laramee and her seminal sculpture Apparatus for the distillation of vague intentions; Kiki Smith, whose sculptures explore mortality and decay; and Janine Antoni, who created a series of deceptively delicate sculptural portraits using molded chocolate. Lillian says that the work of these women artists who are one or two generations older than Sifre, provide interesting points of reference and link her work to a time of important developments in feminist art. 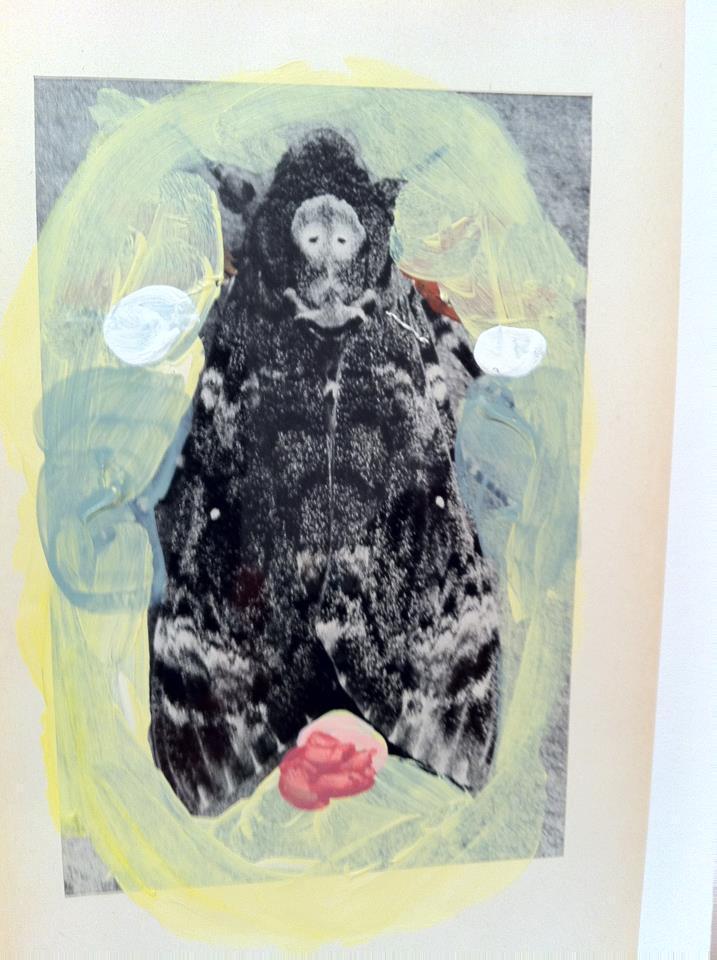 The work which probably best exemplifies Sifre's aesthetic was also the most enigmatic and temporal. Constructed solely for the opening of the exhibition, a large square hole was excavated in the outdoor patio of the gallery. At the bottom of the five foot deep pit, she had made a fire which burned steadily during the night creating both a spectacle and adding a sense of danger to the proceedings. The image of the hole is richly metaphoric, while the fire is elemental. Combined they create a compelling icon, the memory of which remains long after the fire is consumed.

The most compelling work encompasses the entire exhibition, providing a record of each of the artworks and presenting sources and explanations for the works on view. This is THE BOOK OF SCENTS, a limited edition, hand-made, 52 page book of poems and recipes. It contains: the formulas, which I had read, for all of the bottled perfumes; the paintings of flowers, butterflies and beetles; and a series of poems, derived in part from dictionary definitions. Sifre says that there is nothing more poetic than a definition. She has been known to use some of these poems as songs and she has presented them in performance works in the form of artistic karaoke.

What should we do?

What should we call this?

Do you think it's life?

And it is beautiful

Like a rock into a warm glass of milk