When the May 2017 issue of Modern Painters art magazine arrived in our mailbox, the first thing that caught our attention was a series of photographs by Louise Lawler. described as “a portfolio of new images … twisted versions of the originals, evoking our current landscape of 'alternative facts'.” Lillian was especially taken by the cover image, Modern Painting, (adjusted to fit), distorted for the times, 2003/2017. 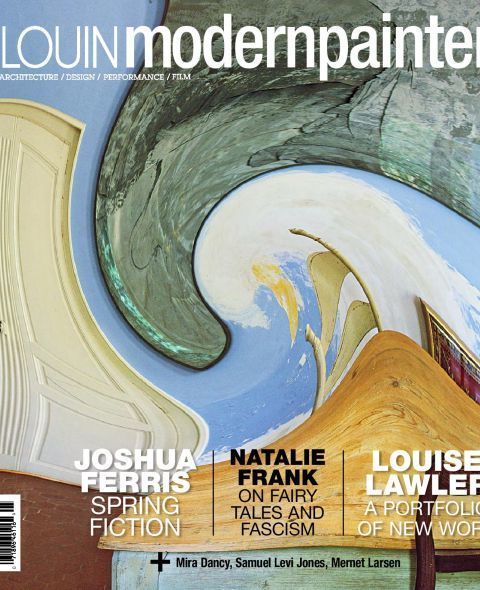 Lillian was not so intrigued by the distorted image, but wondered about the cloud-like pattern on the wall, puzzling over whether it was evidence of workmen repairing the room, or if it was some unexplained artifact of the photographic distortion process.

In a brief essay accompanying nine pages of images, the magazine's new editor in chief, Rachell Corbett says, “Lawler … developed (this) exclusive portfolio for Modern Painters. The twisted and warped images in these pages build upon Lawler's long tradition of photographic manipulations, such as her 'adjusted to fit' series in which she stretches images to fit their display space, and her 'tracings,' which turn photographs into colorless outlines.”

We were aware of Lawler's 2017 retrospective “Why Pictures Now” at MoMA and a quick Google search produced reviews by Roberta Smith and Peter Schjeldahl, plus a link to a short essay by MoMA curator Roxana Marcoci along with three videos in which Marcoci discusses and explains Lawler's work, especially these newest photographs.

The pictures in Modern Painters magazine are the same pictures on display at MoMA, with the exception of the magazine cover photograph. Those photographs have been re-proportioned to fit the pages of Modern Painters, hence their “exclusivity.” They have been 'adjusted to fit' the exact size of one page or a two page spread – a task made easy using a page layout/design software or Photoshop. In this instance, it's all in the numbers. Take the dimension of the original photo, then re-size it to the new dimensions of the display space.

For example, Lawler's 1992 photo Salon Hodler, made in an edition of five, one of which is in the Whitney Museum collection, can be resized to fit the cover of Modern Painters by simply replacing the rectangular dimensions of the original photo (119.7 x 144 cm) with the square dimensions of the magazine cover (26.49 x 26.49 cm)

Regarding the distortions applied to her photographs, as presented in Modern Painters and at the MoMA exhibition, we refer to this example, Pollyanna, 2007, original format (left) and distorted (right). 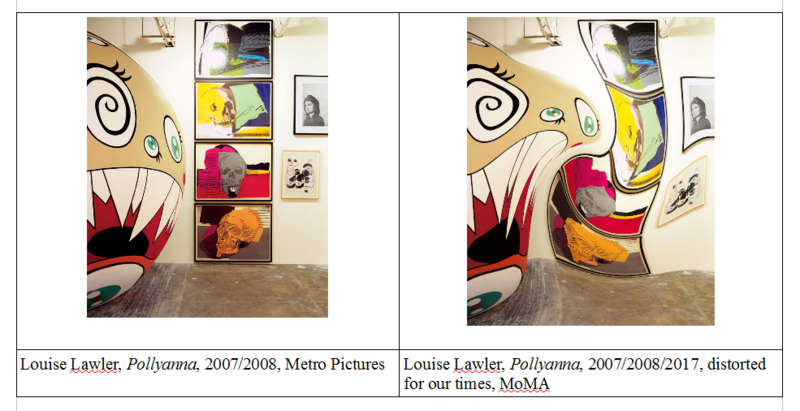 This distortion is the result of applying Photoshop's Distort/Twirl filter, three times, using the default setting of 50, as shown here ... 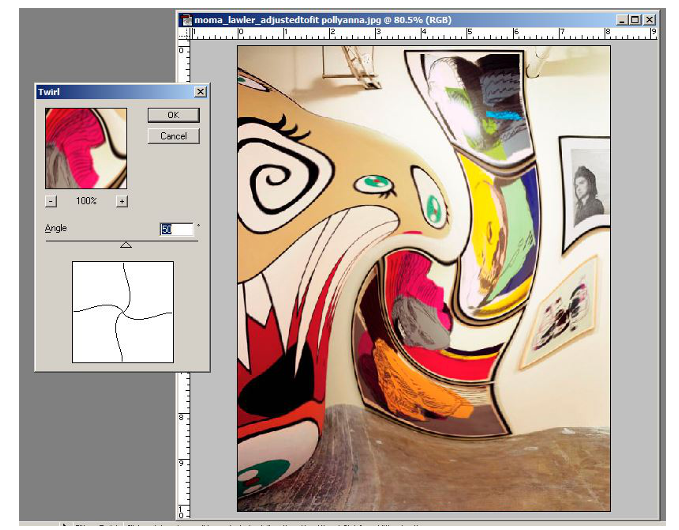 Another distortion is somewhat more complex as shown by the example of her 2003 photograph, Still Life (Candle), original (left) and stretched and distorted (right). 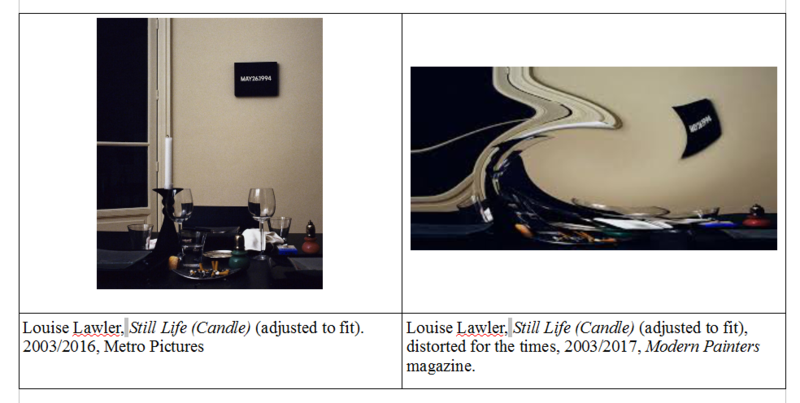 In this instance, the photo was distorted using five applications of the Photoshop Distort/Twirl filter, with the default setting of 50. Then the image was stretched to fit the space of a double page spread of Modern Painters magazine.

Which brings us back to the Modern Painters magazine cover image. It took a bit of advanced Google to find the original of Lawler's image Modern Painting, 2003, as there are no immediately available online images of this photo, but in the September 2009 issue of Visual Studies, the article Photography and painting in multi-mediating pictures by Hilde Van Gelder and Helen Westgeest uses Modern Painting, 2003 to expound on their thesis that some artworks, because they contain elements of photography and painting, should be labeled “multi-mediating pictures.” Regarding Modern Painting they say, “Lawler’s photograph shows a painting by Anselm Kiefer hanging on the wall of a living room. Kiefer's painting is a black-and-white photograph of a landscape, manipulated with paint, and combined with corroded lead plates. So the only ‘real painting’ is (that) created by the indefinable brushstrokes on the wall...” (those brushstrokes made by workmen making repairs to the room [ed.]). 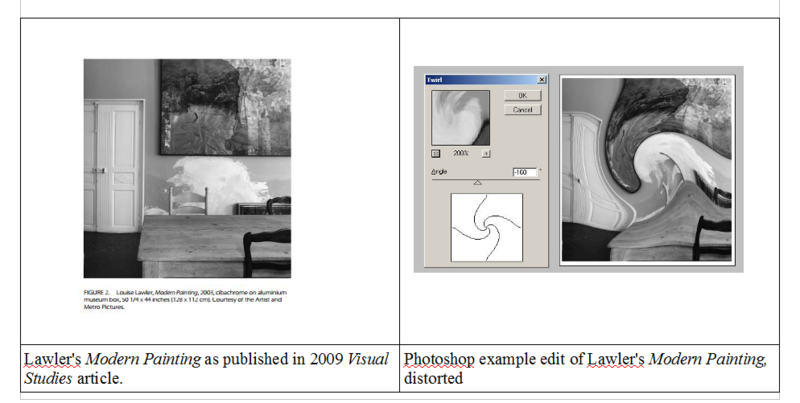 Lawler's Modern Painting as published on the cover of Modern Painters magazine was distorted using one application of the Photoshop Distort/Twirl filter, changing the default setting from 50 to a new value of -160.

Lillian's perceptions were accurate. The cloud-like pattern is the result of an unfinished project by workmen patching and repairing the wall where the Kiefer painting is hanging, distorted nearly beyond recognition by the application of the Photoshop Distort/Twirl filter.

Regarding Lawler's “tracings” also mentioned in the Modern Painters article, the MoMA exhibition includes examples of her traced photographs, including Salon Hodler, 1992/1993/2013. 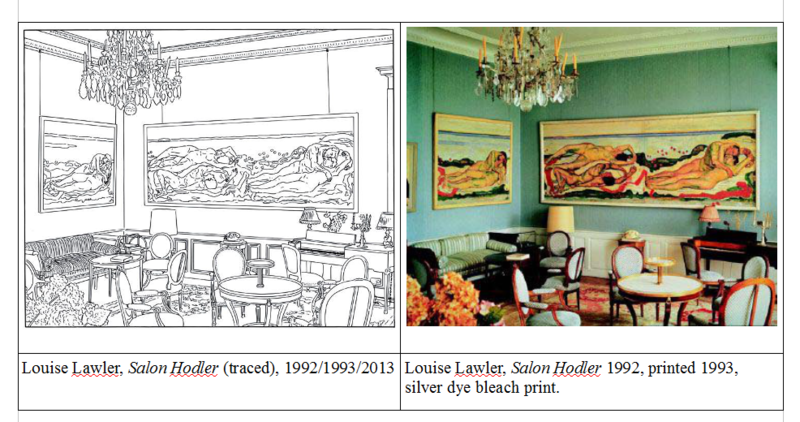 Our initial speculation was that the tracings were made using a combination of Adobe's Photoshop and Illustrator software. A further Google search for Lawler's NO DRONES project (her title for a series of these traced artworks first exhibited at Ludwig Museum in 2013) revealed that the tracings of her photographs were created by Jon Buller, best known as an illustrator of children's books. When contacted, Buller explained his process for producing the tracings as follows: Working with high resolution files of Lawler's original photographs, Buller adjusted the images in Photoshop for more contrast; then he made 16 x 24 in. prints which were then traced by hand using a lightbox, tracing paper and Pigma Micron pens. Those tracings were scanned; the bitmap scanned image files were edited in Photoshop, then final edited and converted to vector in Illustrator; the Illustrator files were used to make the final prints for exhibition.

About the process, Buller says, “I had always thought that Louise's idea to base her own art on the artwork of other artists – seen in such a way as to provide a sort of deadpan commentary on the social function of these works – was a clever one. But doing these tracings and spending more time with her photographs, gave me an increased appreciation of the photographs as photographs ... (and) it gave me an increased respect for Louise's work.”

Buller's insight is telling. We have been familiar with Lawler's work since her 1978 exhibition at Artists Space of a found painting, and her early 1980s exhibitions of her signature work – photographs of other artists' work in art galleries, museums, auction houses, and the homes of collectors. Those photographs are indeed deadpan comments on contemporary art and its milieu. These newest works, distortions and adjustments of her own early photographs, including the tracings made by Buller, extend that deadpan quality into both a comment on the artworld and comment on the world at large, especially (based on her titles) the contemporary political sphere. The drawings however suggest a dichotomy. Where the adjusted and distorted photographs are created by employing default settings of the software used in their production, they can be seen as mechanical reproductions (in the Walter Benjamin sense) and devoid of the human touch. The drawings on the other hand, with their quirks and imperfections, immediately impress us with their humanity. One can only speculate why this choice was made by Lawler, but following from her titles, these photos have been distorted “to fit the times” and adjusted “to fit the situation,” both rather inhuman impositions on the human condition. The drawings, under the label NO DRONES, seem to be a human reaction to an inhumane military mechanism. The presentation of these works as enlargements on a grand scale (some as large as 20 x 30 feet) and in a temporary format (vinyl prints mounted directly on the wall) both confirms and contradicts the idea of things being “blown all out of proportion” in this era of alternative facts and deliberate distortions of events and the facts therein.