“I still say the art here reminds me of New York's Lower East Side in the 1980s,” says Lillian.

“What? Do you think that the art here looks like Neo-Geo, Neo-Pop, Street Art, and Neo-Expressionism?” I ask.

“No.” What I mean is that the New York art world at that time had a youthful energy and a sense of community and cooperation between artists and gallery owners. Artists worked with colleagues to develop a new culture. At the same time they participated in the international art world and were recognized with important opportunities and represented in influential exhibitions. That's what it feels like here now,” she explains. 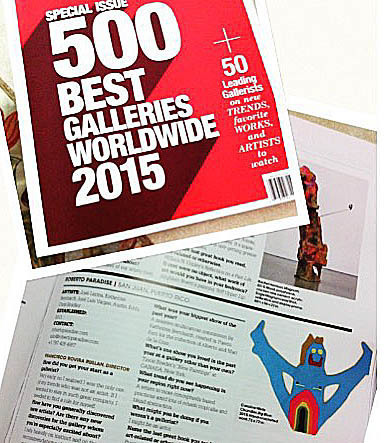 A good example of that type of energy and commitment is El cuadrado gris / The Gray Square a project of the art couple Anna Astor-Blanco, curator and Ozzie Forbes, photographer. After working and living in an art filled apartment, they decided to find a place of their own that could serve as both a home and an art gallery. They discovered a small uninhabited house in Barrio Obrero which they could remodel to their specifications. Having turned the basement of their building into what they call “a platform for contemporary multimedia artists and their work,” in early 2015 they began presenting exhibitions and multimedia art installations. First time visitors may be surprised to find that from the outside, the building looks like many of the other houses nearby. Except for decorative lights on the front porch and rather loud club music coming from inside, (Forbes has the reputation as a serious dj for contemporary music from Argentina) 455 Tito Rodriguez is hard to distinguish from surrounding houses. Passing through the front rooms and kitchen, you discover a small narrow stairway leading down to El cuadrado gris, two interconnected basement rooms – walls, ceiling and floor painted a medium gray, creating a perfectly neutral environment for the presentation of contemporary art.

Most recently, Astor-Blanco and Forbes turned their subterranean space over to the fertile imagination of artist Nayda Collazo-Llorens who took literal advantage of the opportunity, creating the project she calls Debajo de la Casa / Under the House. Collazo-Llorens says she immediately felt an affinity between their repurposed domestic space and her own house where she grew up, the homes of her aunt and grandparents, and the house she used as her studio, all in nearby Santurce. She says she was captured by a curiosity about this hidden space, “not knowing what might be found, a mix of the familiar and the unknown, the near and the far, it is a space that requires navigation.” Her answer was to bring elements of her earlier experiences into this underground architectural space, presenting them in a new and updated context. These include a collection of her grandfather's books that she stacked in a corner, from the floor to the ceiling, placed with their spines against the wall hiding the titles from the viewer and creating a sense of mystery about the stories and history they contain.

The largest and immediately impressive element of her installation is also the most mysterious. Entering El cuadrado gris one discovers a series of light gray, abstract, concentric designs painted directly on the walls and pillars. As you walk around they seem connected, but only when you find a specific location do these designs coalesce into one coherent pattern that suddenly floats within the space, appearing to hang in the air just out of reach. The effect is startling, impressive, and is its own reward for having exercised your curiosity. 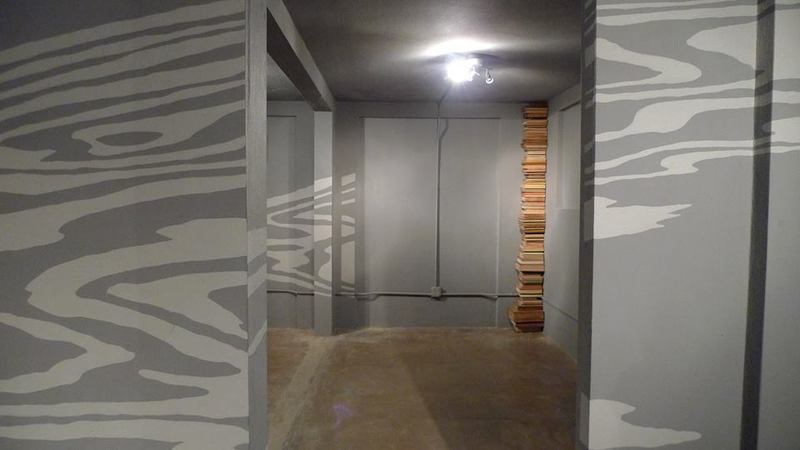 After a nine month residency, part of Beta-Local's La Practica program, artist Ramon Miranda Beltran was given use of Casa del Sargento to present sujecto/objecto, a series of related sculptures and projected photographs created during his residency. Beta-Local was founded as a non-profit in 2009 in the spirit of 1980s New York organizations such as Exit Art, and Art in General. Beta-Local is dedicated to promoting local artists and connecting them to the international art community. Through programs like La Practica, they support and encourage artistic practice and aesthetic thought working to make art an essential social and political part of the life of the community.

Beltran, a recent graduate of UPR and the School of the Art Institute in Chicago, has made his sculptures from cement and wood native to Puerto Rico. Each object, meticulously crafted, has been carefully placed within the main room of Casa del Sargento, situated for easy viewing, but also arranged in a precarious balance. Made from heavy and substantial materials, the sculpted objects lean on and support each other in such a manner that an incautious or accidental touch would cause them to tumble to the ground. Beltran's photographs follow a similar narrative. One group of pictures were made looking out the windows of model apartments in the controversial Paseo Caribe complex and the others were taken through the windows of office spaces used by residents of the adjoining Caribe Plaza – residents who have come to the island specifically to take advantage of new tax exemption laws. For Beltran these businessmen have a relationship to the island as tenuous and uncertain as the parts of his sculptural constructions have to each other. 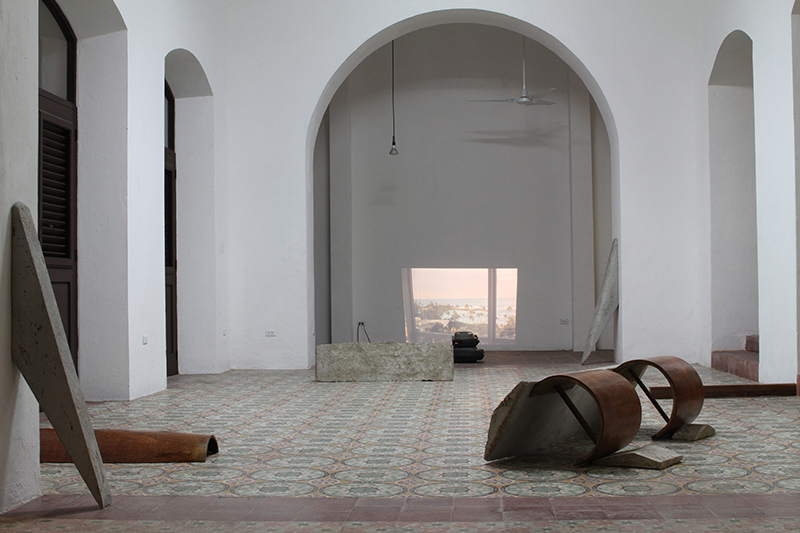 Last winter, Christopher Rivera and Manuela Paz converted a small clothing store in Hato Rey into a clean white space for showing art, leaving one of the walls, covered with floor to ceiling mirrors, intact. This was an excellent decision, as it makes the long and narrow space feel much larger, while providing an interesting challenge for artists when displaying their work. In the most recent four person exhibition, LEAN, artist Esther Klas who was born in Germany and works in Barcelona, used the mirrors as the surface onto which she drew a series of small faces. They are subtle and could easily be overlooked. On the floor sits a pair of bright orange running shoes, sculpted from beeswax, by Melissa Hopson of Indianapolis. Together Hopson and Klas created a pair of inkjet photographic prints which are mounted on the front window and can be seen from either side, depending whether you are inside or outside the gallery. Claudia Peña Salinas, born in Mexico and lives and works in Brooklyn, has used the former fitting room to present a group of one-of-a-kind inkjet prints which are mounted on wax panels which adds a luster to their day-glo colors. Among Brooklynite Linda Matalon's sculptures is a pair of wooden frames, coated with wax, which literally lean against the wall. The six struts for each frame are assembled, unattached. Three pieces lie on the floor, while two others lean against the wall, with the final strut balanced on top.

Lean is a good title for this exhibition, as many of the works are presented leaning or balancing instead of being traditionally attached to the walls. The exhibition itself is lean. These works, curated by Elena Tavecchia, are judiciously few in number, spare in their materials, minimalist in presentation, while they seem to have a special resonance in these lean economic times. 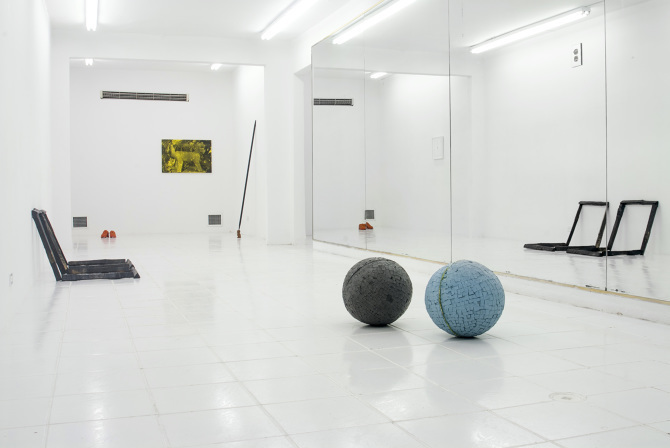 Now in its third year in a refurbished commercial building in the Puerta de Tierra district, Walter Otero's gallery is distinguished by the full length glass paneled overhead door which is its front entrance. On particularly balmy evenings the door is raised and the gallery becomes an open-air emporium. The door also serves a practical purpose, allowing large scale art works to be easily brought into or out of the building.

Temporarily closed for July vacation, the gallery recently presented a group show by a dozen gallery artists. Prominent among them was a group of working drawings by Jennifer Allora and Guillermo Calzadilla. Titled Body in Flight (Delta), they depict one of six works presented at the 2011 Venice Biennale under the title Gloria. Each drawing in this set shows a female gymnast in a brightly colored leotard using a business-class airline seat as a platform for her Olympic style balance beam routine. During the Biennale, Allora and Calzadilla presented Body in Flight (Delta) as a continuous series of gymnastic dance performances. Local gymnasts, were instructed to perform a routine, choreographed in conjunction with a modern dancer to include both gymnastic and dance elements. Unlike normal gymnastic routines lasting two minutes, these were designed as 17-minute tests of endurance contradicting, as they say “the intention of the luxurious airline business class seat designed for maximum comfort of the passenger and functioning as an object of admiration in our capitalist culture.”


Another contradiction of creature comfort is found in the work of Rademes “Juni” Figueroa, a 2013 graduate of the Beta-Local La Practica program who also exhibited at the Whitney Museum Biennial that same year. Figueroa here presents a pair of automobile radiators whose grills have been incised with a blunt object, probably a screwdriver, creating brash, yet delicate drawings on the surface of the cooling fins. The drawings have the characteristic of slapdash graffiti wall drawings seen all over the city, and the imagery, palm trees, pirates, sunbursts, and occasional words like VAQUERO, COCO, or even phone numbers completes that connection. Of course, once the surface of the fins are damaged, the device will no longer function to provide cool air. 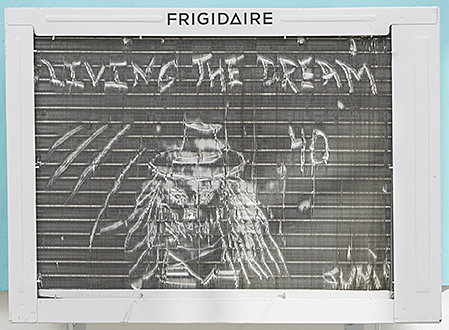