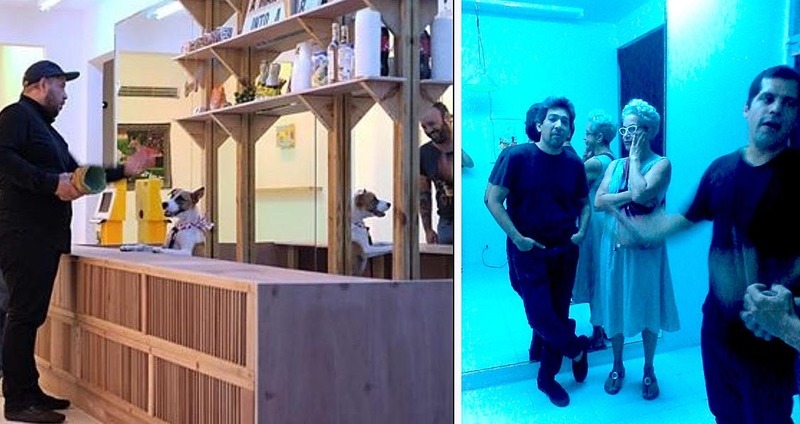 In 1913 Marcel Duchamp presented Bicycle Wheel, the first in a series of artworks he called Readymades, objects selected using a method of visual indifference in which the idea came first. At the time, André Breton defined readymade as “an ordinary object elevated to the dignity of a work of art by the mere choice of the artist.” To create Bicycle Wheel Duchamp selected the front wheel and fork of a black bicycle, mounted it upside down on the seat of a white wooden four-legged stool, then signed and dated the work, adopting readymade, a term used to describe manufactured items, distinguishing them from handmade goods. Duchamp adapted the term ironically to specifically define artworks he would create merely by selection. Because he combined two already made objects into one, he labeled Bicycle Wheel a Readymade (assisted) and then created others including With Hidden Noise,  a ball of twine clamped between two brass plates, joined by four screws. An unknown object was secretly placed inside the ball by one of his friends, and he never discovered what it was. Examples of “pure” Readymades include In Advance of a Broken Arm, 1915, a snow shovel with the title written on the handle, and Traveler's Folding Item, 1916, a leather Underwood typewriter cover, signed and dated by Duchamp.

In 2005 Jesus “Bubu” Negron was included in the Whitney Museum Biennial, where he presented Honoris Causa, consisting of a table from an African street vendor selling handicrafts, coupled with a hot dog cart – locating them both outside the museum. In 2014, Radames “Juni” Figueroa was selected for the Whitney Biennial, and he created Breaking the Ice, a small wooden structure, similar to a typical Puerto Rican casita, that sought, says Figueroa “to bring a bit of Caribbean atmosphere to New York with references to the tropical and beachy architecture of Puerto Rico, and which included several heaters placed to warm up the space, recreating a tropical climate.”

Late last summer, Negron and Figueroa took over the Embajada gallery on calle Cesar Gonzalez in San Juan, and turned it into a clandestine speak-easy, of the sort found along the calles of Bayamon. They called it La Barra de Paquito, named after Figueroa's dog, Paquito – who, for the duration of the exhibition, served as the bartender.

Artists following a similar aesthetic, Negron and Figueroa until this exhibition, had not previously created art together. Billed as a one-person exhibition of new work by Negron, the project was curated by Figueroa who, in the manner of his Whitney installation, built the make-shift bar from various scraps of lumber, at a slightly small scale – to fit the stature of his dog Paquito.

Other works created by Negron include two cute puppies painted on the back of cardboard beer cases and a slot machine simulating the locally made and illegitimately rigged machines found in convenience stores around the island, this one made of paper mache, cardboard, and an iPad which displays three dogs as the winning combination.

In addition to the work of Negron, Figueroa chose complimentary works by fifteen other artists, some displayed on the bar and others hung on the walls of the back room, including a painting by Leo Fitzpatrick that says: A MAN WALKS INTO A BAR, and a mixed media group of pint liquor bottles by Jessie Stead & R. Lyon called: Duh Angel Signature Cocktail.

In the leadup to their exhibit, on Facebook Negron and Figueroa posted a series of announcements and messages, all carrying the theme: NOTHING CONCEPTUAL. However, it's possible they were speaking ironically, as in NOTHING PERSONAL – which when used as an apology implies that the speaker really did not mean what he was saying. Here, Negron and Figueroa mean exactly what they say. Both artists have a long history of making work and creating installations that are simultaneously entertaining and a challenge to the viewer's sensibilities. Make no mistake, this is art of the most interesting sort, and – it is conceptual.

In 1969 Sol Lewitt published 35 Sentences on Conceptual Art in Art-Language magazine. A couple of examples: #1) Conceptual artists are mystics rather than rationalists. They leap to conclusions that logic cannot reach; #14) The words of one artist to another may induce an idea chain, if they share the same concept; and #30) There are many elements involved in a work of art. The most important are the most obvious.

At that time, conceptual artists were considered dry, humorless, intellectual, and against any art that was decorative or representational. Developed in opposition to the tenets of critic Clement Greenberg, who championed formalism against illusion, conceptual art promoted ideas above objects. As artist Lawrence Weiner declared: “Once you know about a work of mine you own it. There is no way I can get inside someone's head to remove it.”

Now you know about some of the work of Jesus “Bubu” Negron and Radames “Juni” Figueroa and so you own it -- it is yours do with as you wish. Just be careful that they don't come looking for you …